In this day and age, Voice-to-text technology has become common in everyday life. A report from Voicebot.ai indicates that in early 2019, 58% of the online population has utilized voice search, 33% of them use it monthly, and 11.8% daily. Using voice as input has been on the rise in the past few years, and for good reason. Smart speakers and mobile devices are now one of the most common adaptors of voice technology, making it easier to access. Not only that, the accuracy of newer speech recognition products is often as high as 95-97 percent, aided by deep learning and other functionalities. Big names in the software industry including Google, Microsoft, Apple, and even Amazon, have adopted the said technology.

The demand for voice recognition technology is undeniably high, yet if you look at how it is currently being used, you’ll find that it’s not living up to its fullest potential. The most common use for voice recognition on smart speakers, according to an analytics survey done by Adobe, are the following:

Sure, some people do use Voice-to-text technology for writing, taking notes, transcriptions, and to aid people with disabilities. However, only a select few utilize voice technology this way. As of now, it is mostly adopted for personal or home use, and while it’s great that people at home can play music or search for the nearest drugstore using their voice, one can’t help but feel like this technology, which supposedly offers 97% accuracy, isn’t put to the best use. 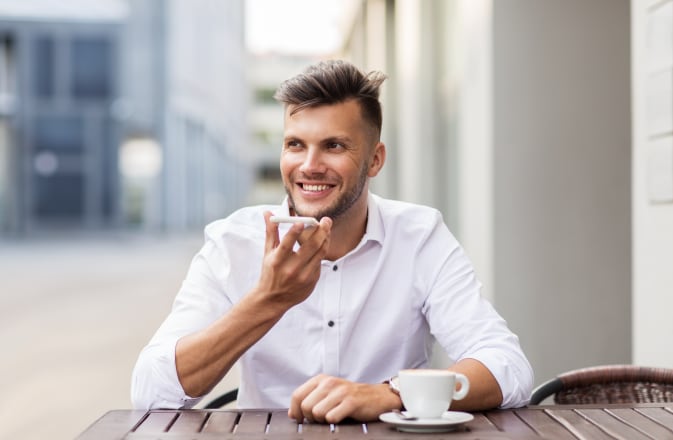 Voice to text for Work and Productivity

With voice recognition technology on the rise, it will most likely be part of the workplace soon, on a worldwide scale. In fact, due to the current accuracy and efficiency it delivers, why shouldn’t it be? Wasteful processes in the workplace often come in the form of administrative tasks such as writing and sending emails, manually taking down meeting notes, transcriptions, data entry, and more. Most of which can be aided by using a voice-to-text service. A lot of the other repetitive tasks such as making Google searches, setting appointments, calling someone, and asking for one’s schedule, are also made faster, and hands-free.

Developers have long seen this need in the workplace, and have applied voice technology in productivity apps, or at least, allowed it to be integrated.

For writing and notes, some of the best applications include Speechnotes, which is a free online speech-to-text tool, and Dragon Professional Individual, which is popular for its 99% accuracy and use of AI. Google docs also has its own voice-to-text feature that is available for free, for all Google docs users. All you need to do is speak, and the application will type what you say.

Doing transcriptions manually is a pain, which is why apps like Just Press Record and Amazon Transcribe were made. Just Press Record is an app for iOS that looks like a normal mobile recorder with a red dot, but not only does it record, it also transcribes audio into editable text. This app is great for on-the-go meetings and personal audio memos. Amazon Transcribe, however, leans more towards the business side. It transcribes audio into text, automatically adds punctuation, does vocabulary editing, as well as time stamping, aided by deep learning technology, to deliver more accurate results.

Both Mac and Windows have built-in speech recognition features that allow you to make emails through speaking. In Mac, a program called Dictation can be used by pressing the function key twice when it is activated. A similar feature, called Speech Recognition, which can be found in the Control panel, is also available for Windows. Regardless of the account or provider you use, all you have to do is enable these features when making emails.

According to research, speaking is seven times faster than typing. Because of this, utilizing voice-to-text software will undeniably help increase the speed of your workflow, all in all. One of the best ways to apply Voice to text technology at work is by using it for CRM.

In the workplace, Customer Relationship Management(CRM) collates customer information, tracks interactions, and analyzes data, for a smoother sales process, and to increase customer retention. Many CRM softwares are available in the market, but one thing remains clear throughout: A company’s CRM is as good as the quality of the data fed into it, which is why the information must be accurate, and complete.

We all know this, but we also know that CRM’s number one problem is user adoption, due to tedious manual data entry. Imagine having to manually input data into your CRM every time you schedule a meeting or talk to a client. With this, problems like forgetting, and mistyping can arise. Instead of spending all that time typing down info, why not integrate voice-to-text technology instead?

Salesforce CRM initially launched a campaign for this called Einstein Voice, although the project was abandoned, it left a lot of potentially good implementations which we can utilize any CRM.

The integration of Speech recognition for CRM data entry is called Voice to CRM. With just a press of a button, it allows you to record meetings, and input data using speech. In general, the audio data gathered is parsed and entered into the correct fields in your CRM. It automates manual data entry and frees up time and effort for employees, and even sales reps. The goal is to eliminate manual data entry, increase user adoption, and create faster more efficient workflows.

A major concern with Voice to CRM however, is the quality and effectiveness of the Voice technology itself in delivering accurate data, and automatically placing it in the correct fields. Sure, it has that capability, but how can we guarantee that it does the job right, without any human intervention?

Hey DAN is a Voice to CRM enablement software that combines machine learning with human intelligence, to doubly ensure data quality. As the information is analyzed artificially, using voice recognition technology, it is backed by human support to ensure that the most accurate data is entered into the appropriate fields. With HeyDAN, people in the workplace can confidently enter data into their CRM using just their voice, increasing productivity, and delivering quality data, all at the same time.

Download the Hey DAN app and give it a try.